Live in the Heart of Chicago’s Theatre District 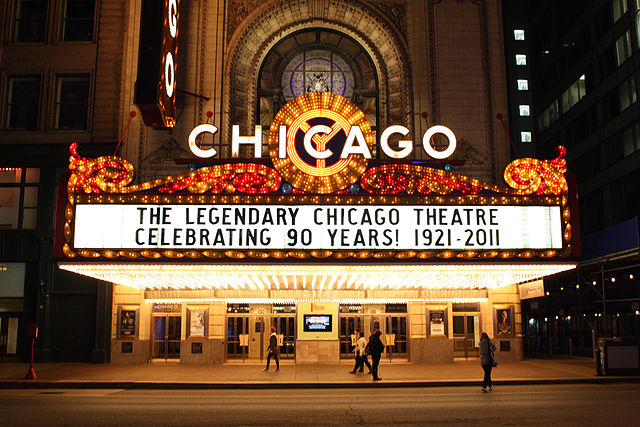 OneEleven Apartments are located only a short walk away from Chicago’s historic Theatre District. It would be no surprise to have your favorite band or stand-up comedian performing only a five minute walk from your OneEleven luxury apartment. Love to watch classic or new plays? Want to experience a hit broadway show? Just go a couple of blocks to the following venues and experience a part of Chicago’s theatrical and architectural history. Here are our favorite historic venues that you can walk to in Chicago’s theatre district from your OneEleven luxury apartment:

For the frequent concert-goer: Just a short walk away from OneEleven is the Chicago Theatre, one of Chicago’s legendary entertainment venues. Built in 1921, the Theatre has been a hotspot for movies, concerts, plays, and other live shows, such as stand up comedy and even Cirque du Soleil. The primary architects, Cornelius W. Rapp and George L. Rapp, built the theatre in their signature Neo-Baroque French–revival style. It is currently the oldest building in Chicago built in this style.

For the film-buff: Directly across from the Chicago Theatre stands The Gene Siskel Film Center, the Film Center for the Art Institute of Chicago. The Film Center moved to its current location in 2001, although it was founded in 1972. Its state-of-the-art facilities host close to 1,500 independent, classic, and international film screenings a year. It’s a great place to experience films you will be surprised to be watching only minutes from your apartment.

For the musical-enthusiast: In 1926, the New Palace Theatre was opened, providing orchestra music for the masses. The Rapp brothers were also responsible for the design of the building, which was inspired by the French Fontainebleau and the Palace of Versailles. In 1984, it was renamed the Bismarck Theatre and became a rock music venue. When Cadillac bought the naming rights in 1999, the Cadillac Theatre was born. Currently, the theatre hosts broadway musicals, most recently Jersey Boys and Once.

For the theatre-lover: The Goodman Theatre was founded in 1925 and named after the Chicago playwright Kenneth Sawyer Goodman. In 2000, the theatre company moved from its original location to its current location at 170 N. Dearborn. The Goodman is known for hosting innovative and new plays. Currently, you can go see Wonderful Town, a musical set in 1935 New York City.

For the song-and-dance fan: Opened in 1926, the Oriental Theatre, another Rap and Rap architectural landmark, this theatre quickly became one of Chicago’s premier movie palaces. In its early years, the theatre provided both movies and vaudeville acts. But a few years after opening, the theatre became a movie house that also hosted other live performances. Currently, the theatre puts on musicals and other performances.

If you’re interested in learning more about living in luxury apartments near Chicago’s historic Theatre District, contact us or schedule a tour.